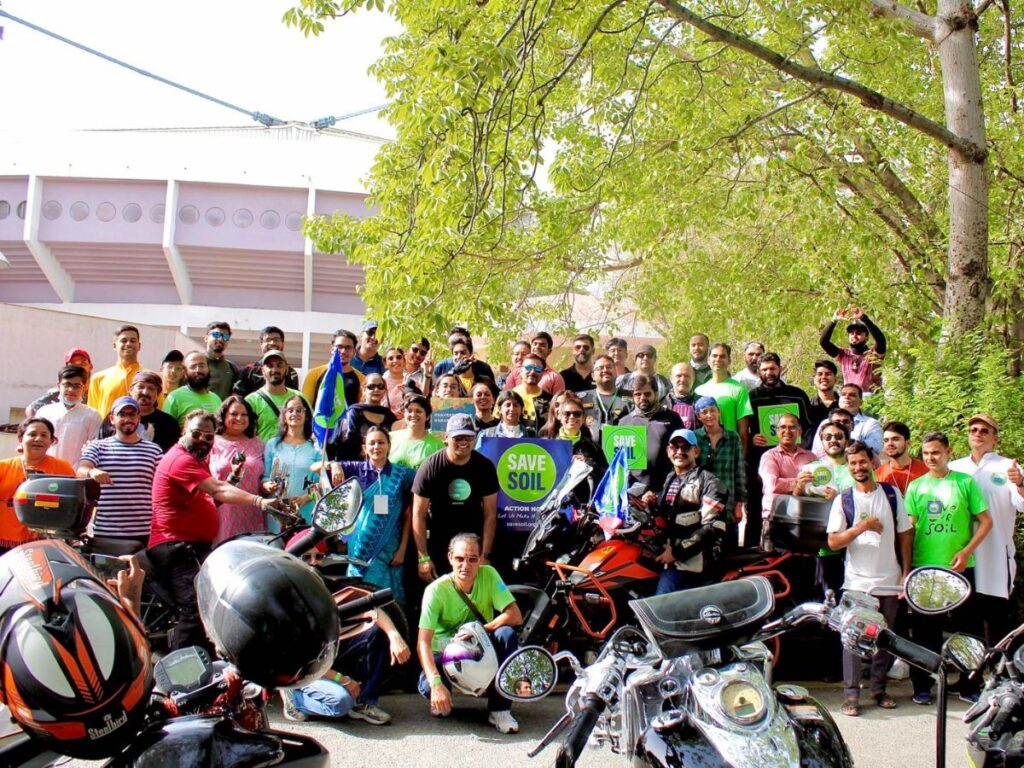 New Delhi (India), July 15: Coinciding with the 100-day worldwide solo motorcycle ride by Sadhguru Jaggi Vasudev to raise awareness about the atrocious impact of soil degradation on humanity; Asteride, a unique tech Start-Up for Bikers, organised a series of “Bikers Rallies” across Delhi NCR to spread awareness about the #SaveSoil mission and advocate the critical need for conservation of soil’s fertility and good health. The Bikers Rally was held at the Indira Gandhi Indoor Stadium as part of the mega event welcoming Sadhguru in Delhi on the 5th of June, which was also World Environment Day!

More than 200 motorcycle enthusiasts pledged their solidarity to the #SaveSoil mission by riding in the scorching heat of Delhi to the venue on Indian Motorcycle, Harley Davidson, BMW Motorrad, Triumph, Honda, Royal Enfield and other prominent brands. The bikers were welcomed at the Stadium by the team of #SaveSoil Volunteers & cheered by over 15,000 people who participated in the event.

As a prelude to the #SaveSoil awareness campaign, Asteride organized one of the largest Bikers Rally & Event in Gurugram at Yansh Adventure Zone on 28th May 2022. The event was attended by over 150 riders representing all brands of motorcycles. During the event, volunteers of the Save Soil mission performed Nukkad Natak, shared tips on saving soil, and a brand new rap song on the #SaveSoil mission was launched by the famous Hindi Rapper – Ashmeet Teja. Prominent riders and motorcycle influencers attended both events in huge numbers, echoing the message to a much larger audience.

Addressing the rallyists, Jitesh Surana, founder of Asteride, said that the time has come for the whole biking community to take collective action towards the prevention of soil degradation by taking initiatives at personal and community levels. Scientists and agencies have predicted that the planet has cultivable soil for only up to 55 years and have warned of catastrophic food shortages leading to civil wars. Asteride has pledged to the cause and taking the #SaveSoil movement across India by an initiative called “Karmic Rides”, which empowers bike riding communities to do good and give back to society and the environment as a collective force.” he added. With over 600 riding groups, Asteride is already the largest Connected Community Platform for Bikers in India.

The ‘Save Soil’ movement was initiated by the Founder of Isha Foundation, Sadhguru Jaggi Vasudev, to urge Governments across the globe to formulate policies to address soil health. On March 21, he commenced a solo motorcycle journey of 30,000 km that is slated to cover 27 countries in 100 days to create awareness.

Visit www.asteride.co  for more details or contact the organisers at contact@asteride.co

Next post Celebrate this Raksha Bandhan by Sending Rakhi Online from RakhiCelebrations.com

Ahmedabad, September 26: The industrious state of Gujarat will add another feather to its cap – a unique and first-of-its-kind Innovation...

NAYA BHARAT MAHOTSAV presented by World Humanitarian Foundation and organized by Trident Events & Media Ltd in London under the...