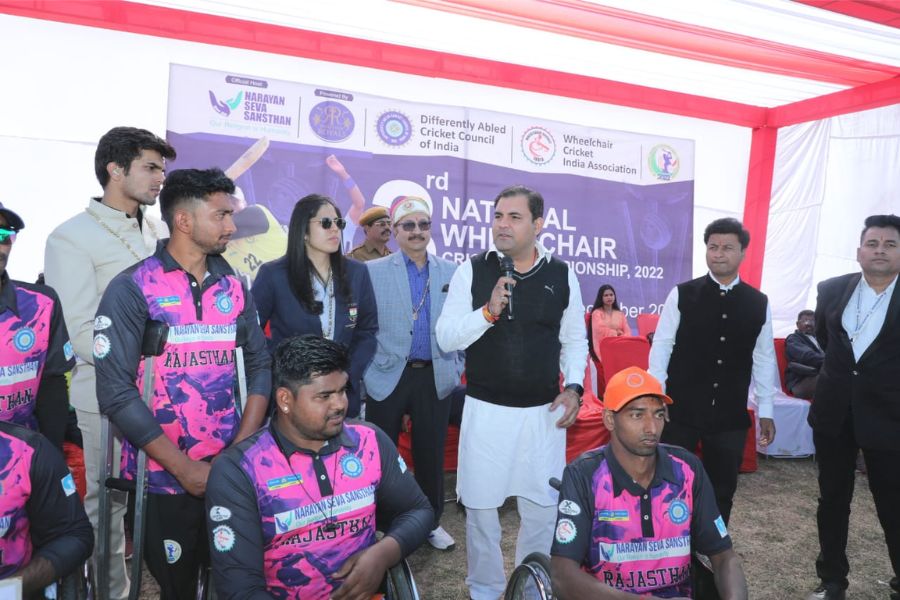 Welcoming the guests and the teams, Padma Shri Kailash Manav, the founder of the Sansthan, expressed gratitude to the DCCI, terming this championship as a matter of pride for Udaipur and Rajasthan. Giving information about the championship, the President of Narayan Seva Sansthan, Prashant Agarwal said that this is the fourth national championship of various sports organized by the Sansthan in Udaipur. Earlier the Sansthan organized Blind Cricket once and Para Swimming Championship twice. He said that the Sansthan is working on the project of the National Para Sports Academy at Dabok. Secretary of Rajasthan State Sports Council, Dr. G. Ale. Sharma said that resources are not important, intentions are important. Struggles will come in life, but those who pave the way are different people, and you are paramount among them. He said that top priority is being given to disabled sports in Rajasthan.

DCCI Secretary Ravikant Chauhan said that the Government of India is giving enough importance to the sports of disabled people in the determination of sports policies. In the BCCI too, a separate committee was formed for the development of Divyang cricket. A friendly match of 10-10 overs between India A and India B team was started with batting by Umashankar Sharma, Rajasthan Specially-Abled Commissioner (State Minister), and bowling by Sansthan President Prashant. He said that Chief Minister Ashok Gehlot has assured that there will be no dearth of funds for the development of sports for the differently-abled. Earlier in the morning, District Collector Tarachand Meena met the captains and players of all 16 teams participating in the championship. He said that sports have great importance in the all-round development of life. Even death can be defeated once by exercise and sports. Describing the special abilities of the players, he said that they have created records in various fields. He gave best wishes while appealing to play every match of the championship with the spirit of sportsmanship. The game was coordinated by Jitendra Verma.

Previous post Botswana and the power of sustainable natural diamonds

Next post 5 New Trending Cryptocurrencies To Invest in for 2023